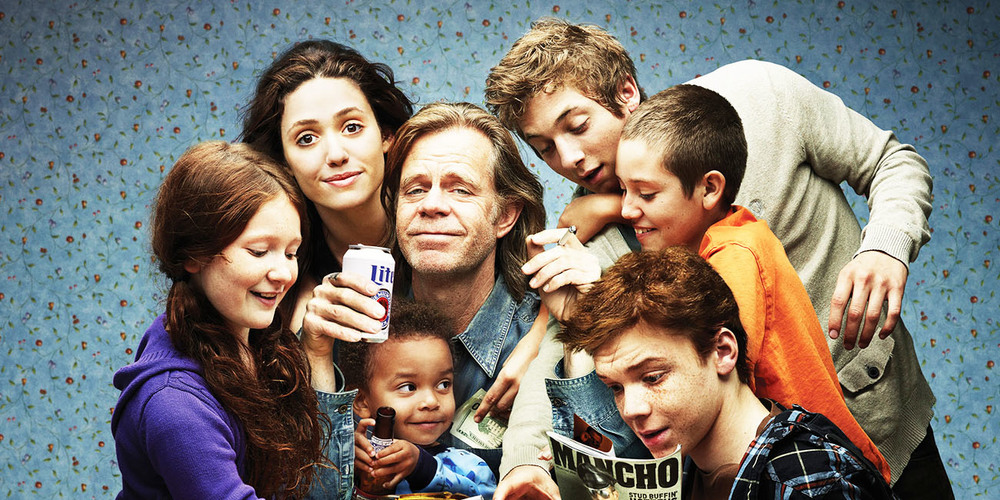 For our second TV music profile, we’re taking a look at showtime’s critically acclaimed dramedy Shameless. Shameless has been quietly building a dedicated following, as well as a mountain of critical acclaim, since its first season in 2011 (that is, the American version – the show is based on a British show of the same name, with similarly high marks from critics).
Shameless is the story of a dysfunctional family headed by an alcoholic single father – Frank Gallagher, brilliantly played by William H. Macy. Frank has six children, who learn to take care of themselves as their father drinks away his life.
The show’s music is unique among its peers, in that it has no composer. The soundtrack is made almost entirely of licensed music, and the list of features is as long as it is diverse. The show has featured tracks from Cream, Spoon, Ke$ha, The Vines, LMFAO, The Eels, Cake, Future Islands, and many, many more. As of this writing, Shameless has racked up over 1500 pieces of licensed music (as tracked by Tunefind.com)!
Here are 5 seminal music moments from the show, which is expertly supervised by Ann Kline. Warning: spoilers ahead!
The Theme Song
Shameless’ theme song is “The Luck You Got” by The High Strung. The song has a dirty post-punk sound that brings to mind the show’s frequent use of drugs, sex and alcohol. The lyrics seem to mirror the experience of the Gallagher children, who have to navigate life’s complexities without the help of their parents – “The time that you would never trade/ Is equal to the effort made/ You were simple once before/ But it’s not like that anymore.” Still, the track retains a sense of optimism and fun, a feeling that pervades the show despite the family’s obstacles and hardships.
Season 3 Finale
In Season 3, episode 12, entitled “Survival of the Fittest,” a powerful moment comes when Frank is hospitalized for his drinking, and his son arrives to offer him a choice – alcohol or his family. The final moments of the season are set to Lord Huron’s “Ends of the Earth,” which features the lyrics, “Maybe I’m headin’ to die, but I’m still gonna try / I guess I’m goin’ alone.” A great track that reflects the uncertainty of both the scene and the show as a whole.
Season 4 Opener
After Season 3’s emotional ending, viewers were surprised by the opening of Season 4, which sees the Gallaghers in a much improved state, with several of the children in stable jobs or school situations. The song “Written Down” by David E. Sugar underscores this optimism with an incredibly upbeat, bright arrangement. But any fan of Shameless would be suspicious of this newfound happiness – and rightfully so, as the remainder of the episode wastes no time in plunging the characters deeper than ever before.
Ian Kisses Mickey
Central to most of the characters’ lives is the search for love, and one of the most compelling love stories is that of Ian, a young gay man with bipolar disorder. His most prominent relationship in the show is with his neighbor Mickey, a violent homophobe coming to grips with his own sexuality. Their first public kiss – obviously a monumental step for Mickey – is set to the sexy, dreamy track “Teach You the Tongue” by Kid Cadaver. Given the song’s title and lyrics, the choice isn’t exactly subtle, but its slow-motion rhythm makes the moment a memorable one.
Trying Opium
Shameless isn’t all doom and gloom – it’s full of funny and exciting moments, albeit always with a bit of an edge. In season 6 episode 9, the character Queenie explains to Frank what she’s really been doing with a massive compost pile – making opium. She invites Frank to try some of the homemade drug, set to “Take Your Medicine” by Analogue Revolution (courtesy of Crucial Music).  Though we can’t bring ourselves to root for Frank’s drug abuse, the track gives us a sense of how he sees the moment – exciting, cool, and tantalizing.
Shameless is an interesting exercise in music supervision – when the soundtrack comprises only licensed music, the challenge becomes creating a cohesive sound when your options are virtually limitless. Luckily, with supervisor Kline at the helm, that challenge has turned into one of the show’s many formidable strengths.